There have been two disruptions to the housing market over the last nine months, but their effects are proving short-lived. First, a sudden increase in interest rates in late 2018 weighed on December and January sales activity. Second, record snow and the subsequent melt in February and March of this year weighed on sales activity in March and April. But May numbers are showing growth in seller activity, pending and closed buyer activity as well as quicker market times and rising prices.

Prices reached a new all-time high of $285,000. New listings rose 2.4 percent while closed sales were up 3.0 percent. After two months of increases, market times sped up by 4.3 percent compared to May 2018. The ratio of sold to list price fell for a fourth consecutive month, but by the smallest amount since February. In conjunction with other indicators, the market is improving for buyers, even though sellers still enjoy strong pricing power, favorable negotiating leverage and quick market times. For the last nine months, buyers have seen more active listings for sale than the year prior. Mortgage rates remain very attractive at around 3.85 percent on a 30-year fixed loan—far lower than anyone predicted by this time. We still have a tale of two markets: strong demand, weak supply and price growth in the affordable brackets but oversupply and slow market times in the upper brackets. 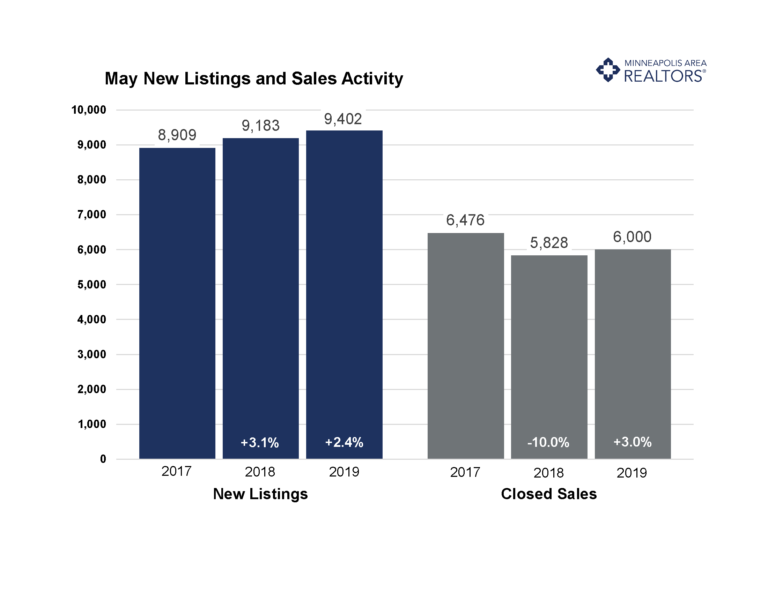 “We’re still seeing some rebalancing, but it just isn’t as dire as some want us to believe,” said Todd Urbanski, President of Minneapolis Area REALTORS®. “Rates under 4.0 percent is a significant motivator for buyers.”

“Not everyone understands that all real estate is local,” said Linda Rogers, President-Elect of Minneapolis Area REALTORS®. “Shifts in other regions have very little impact on our local market dynamics.”
From The Skinny Blog.